3 Reasons Why The Lehman Trilogy Is Such Great TheaterMaking 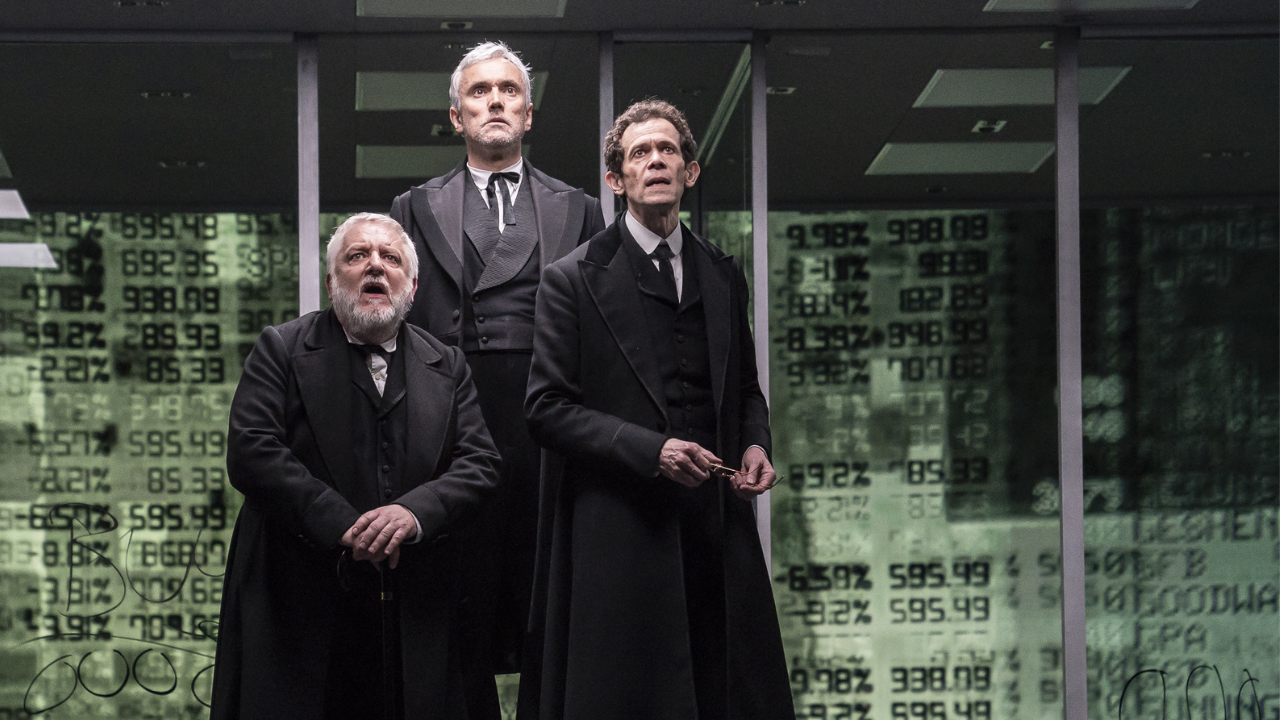 If you follow me on instagram, then you know I saw The Lehman Trilogy before it closed.

And I’m still thinking about it.

As a TheaterMaker, it’s hard to NOT analyze a show while you’re watching it. Am I right? You’re constantly analyzing how they pulled off an effect, or counting cast members, or wondering about budget, etc.

When I was at The Tisch School of the Arts, my Dean once told me, “I know a show is good, when I’m NOT thinking about how they made it.”

Well, that was me at Lehman.

It’s such a fine example of TheaterMaking . . . I had to write about it. One, in the hopes that you’ll see it. Two, in hopes this will  help you make theater just like it.

Here are 3 Reasons Why The Lehman Trilogy is such great TheaterMaking:

2. They could have had a cast of thousands. But instead they chose three.
It was already over three hours long. It was called a Trilogy. Why not continue its opera-like nature and have a cast of thirty? Because that’s not what the theater does so well. What the theater does so well is find a way to have three incredible actors (Simon Russel Beale, Adam Godley and Adrian Lester) play thirty. We watch TV and movies for the absolute realistic treatment of stories. But we go to the theater to watch Simon Russell Beale play a toddler sucking his thumb - and we effin’ eat it up. It’s not “realistic” . . .it’s theatrical. And it’s a reason for the show to be on a stage and NOT on a screen.  (Oh, and THREE actors. There’s that Trilogy again.)

3. They made sure they still gave us a spectacle.
All this said, the TheaterMakers behind Lehman knew that even a terrific three hour play with three unparalleled actors could numb the senses of even the most riveted theatergoers. So they made sure the set was a spectacle. It contrasts the simplicity of the story-telling, which gives an audience something else to not only keep their attention but reminds them of how BIG this story truly was. (The Lehmans had a global impact, after all.) Your eyes go wide at the set throughout the story, which keeps you IN the story as well.

And one more - bonus reason why the show is such a great example of TheaterMaking . . .

4. They surprise us at the end, when we think we know the end.
I’m not going to spoil it, but there’s a moment at the end of the show that turns up the volume of TheaterMaking to another level. It’s something unexpected . . . something that deepens the story . . . and something that just makes you go, “Did they just do that?”

I’m sure it wasn’t scripted when the play was originally adapted, because not a line is spoken about it. And when the idea was first proposed, I’m sure many people, including the budget conscious, said, “Do we really need to do this?”

No, they didn’t. But they did it anyway. And the show is that much better for it.

The last few moments of a show are what the audience leaves with. Lehman made sure we left in awe.

Did you see Lehman?  Like it?  Didn’t like it?  Want to continue the conversation about it?  If you enjoy talking about theater, check out our private and free TheaterMakers Facebook group.  Click here to join over 2,100 folks like you who love the theater and love talking about the theater. Join us.  Because the theater is stronger when we all join together.